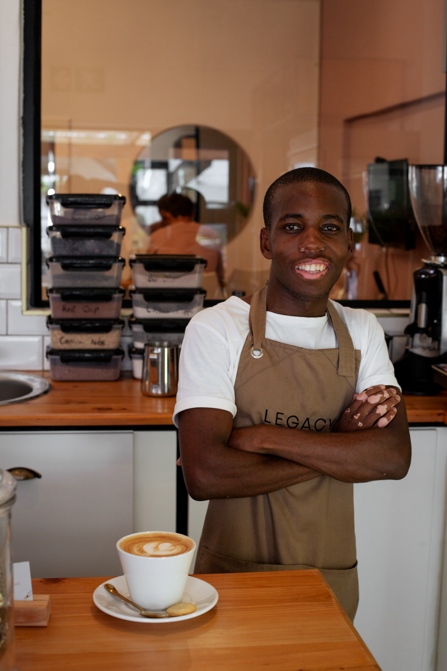 Sometimes being legendary happens, and other times we need to make it happen, which is a bit of both in Mongezi’s case.

“Legacy” is a loaded word we often associate with leaving, as in “leaving a legacy”. It’s a big deal and a lot of responsibility. Have you ever thought about the legacy you would like to leave one day? You might need a moment to think about it.

While you think about it, let’s turn to 23-year-old Mongezi Mbusowakhe Nkosi, who is leaving a legacy as we speak. He was born at Northdale Hospital and grew up in Mpophomeni, where he presently lives. He travels to work every day in Howick, just over 10km away. 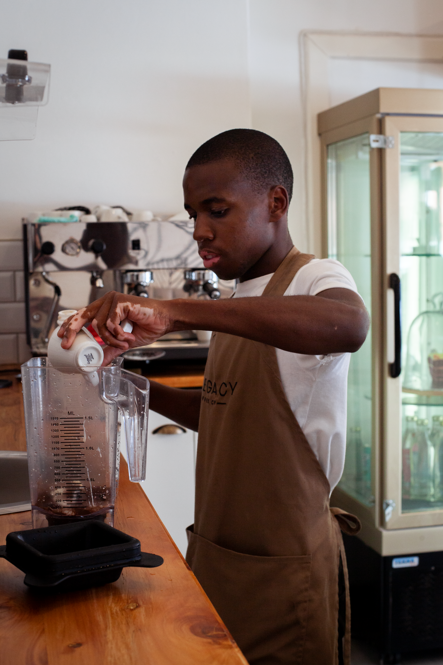 And work, for Mongezi, if you’re wondering, evolved into something he never expected. He believes he is where he is meant to be and was made for this. He is the assistant manager at the Legacy Coffee Co. at 1 Dicks Street, Howick, and the assistant trainer for future baristas who train through the Love Howick Barista Course.

Before we move on, Love Howick is a community organisation tethered to the heartbeat of Howick and its people and is leaving a blazing trail of signs across the Midlands area. Have you seen the red and white “Love Howick” emblems about town?

These have expanded into Nottingham Road and Mpophomeni, too (look out for the “Love Notties” and “Love Mpophomeni” emblems), the firestarter of it all is Matt Hogarty, who mentioned that there are also other areas on the cards. Believing that we are all better together, Love Howick’s mission is to connect people and communities for transformation and positive change. It certainly affects change and not just another pretty red and white sign about town.

This grassroots organisation is creating change for hundreds of the unemployed by providing various skills training short courses through their Dream Centre, which is located in Bell Street. There have been 605 unemployed who completed the Job Readiness Program and collectively completed 1000 hours of volunteer work in various businesses, which is a requirement after completing the course. 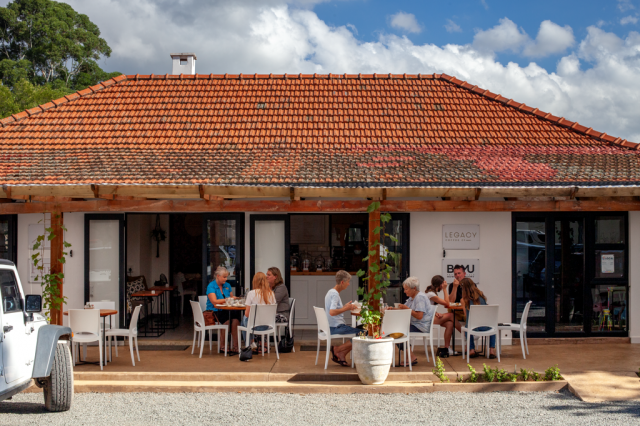 Additionally, 730 completed the Skills Training Short Courses, including workplace experience, to apply their skills. There are an estimated 48% who found employment after completing these courses, and some are also furthering their studies.

This is where Mongezi found his way after he studied his N1 and N2 in Electrical Engineering at Northdale College. Due to illness, he could not complete his N2 and returned home to Northdale where he heard about Love Howick from a former student.

He decided to “check it out”, as they say, and completed the Job Readiness Course, which is Phase One, or “Employment Foundations” of the Dream Centre’s Job Skills Training requirements. Phase Two involves in-service skills training in various sectors like hospitality, administration, retail, artisan, and community services.

He then volunteered at Ackerman’s in Howick as part of his in-service training. After that, he decided to go a different route and enrolled in the Barista course, completing his six-week volunteering practicals at Lineage in Nottingham Road under Barista Mfana, and then under Barista Chappy Ground in Hilton.

Around October 2021, Mongezi joined Matt Hogarty as they prepared to open Legacy Coffee Co. It is a cafe built on the mission and vision of “purchase with a purpose” and where Love Howick’s hospitality training team can put their skills to the test, from baristas, bakers, waitrons, and chefs. Each person is given an opportunity to create their own legacy.

Mongezi models the values and aspirations of Love Howick. Having seen many come and go, he is still making coffee, and good coffee, we might add, and continuously striving for the best. When we asked him what legacy he wants to leave, he said the service delivered in the cafe needs to be of the highest standards, comparing it to the “Eagle way”, which is something he learnt from Matt.

Mongezi’s method for making decisions in his life is deeply rooted in something his grandfather told him, which is “think before you leap” or “cabanga ngaphambi kokuba wenze”. It has guided him to think differently, weigh all the pros and cons of his opportunities, and ask himself what job will provide the most opportunities, which led him to choose the path of the Barista. 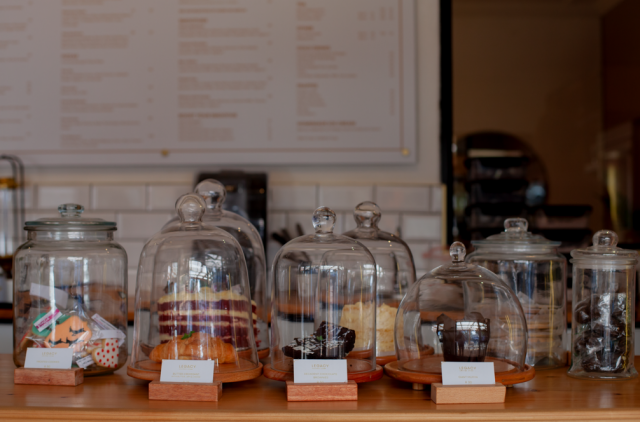 This young Barista has not had an easy life either. Due to a skin condition, he has experienced his fair share of ridicule and criticism, but this has made him stronger. He researched it to better understand himself, which led him to understand that people only criticised him because of their own insecurities.

The name “Mongezi” means something along the lines of “adding”, and he is undoubtedly living up to this. He is adding value to himself and his peers, his family, and the loving Howick community around him.

His advice for anyone who feels that things are not going their way is to calm down, breathe, and make the right choice. That’s where you start. Do you want to proceed or stop? The moment you decide to stop, everything will stop, but if you move forward, everything will move forward.

If you would like to visit Legacy Coffee Co., and we promise the coffee will be legendary, opening times are from Monday to Thursday, 7am to 4pm, and Saturday from 8am to 2pm.

Through The Eyes Of A Local